I love baking homemade bread for breakfast toast and sandwiches during the work week, but there’s always half a loaf leftover by the weekend. We’re getting sick of french toast so the hubby suggested I try making him some bread pudding. After looking through a handful of different recipes, I decided to make my own version using pistachios and white chocolate. Since it was 11 PM on a Friday night and I was out of cream, I decided to substitute the traditional ingredient with Bailey’s Irish Cream. I let the custard soak into the bread overnight and baked it the next evening for friends. Within minutes of baking, the entire kitchen smelled awesome. I used enough where you could definitely taste the Bailey’s in every bite. If you don’t want the alcohol to be noticeable, I would reduce the Bailey’s by half and swap the other half with cream. 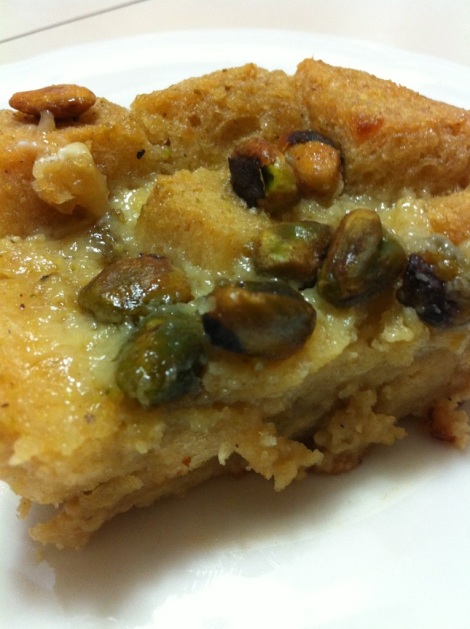 First slice off the crust and cut into 1 inch cubes.

Put the cubes in a small baking dish. Melt 4 tablespoons of unsalted butter and pour over the bread.

Sprinkle 8 ounces of white chocolate chips over the top.

Heat up one cup of Bailey’s, one cup of milk (I only had low fat on hand), a teaspoon of vanilla extract (or 1 vanilla bean pod if you’re being fancy) and a dash of salt until it just starts to boil. Turn off the heat.

Beat up 4 eggs and add 1/4 cup ground raw unsalted pistachios. Slowly pour the heated cream into your eggs little by little and stir gently. You’re trying to temper the eggs by heating them slowly, preventing them from curdling.

Pour the custard over your bread and use a fork to push down gently on each cube. Sprinkle some whole raw pistachios over the top. Cover with foil and refrigerate over night.

The next day, preheat your oven to 350 degrees. Keep your dish covered and bake in the middle of the oven for 45 minutes. Remove the foil and bake for another 10-15 minutes until the top is golden brown.

Let it cool for 10 minutes, slice and serve alone or with a scoop of vanilla ice cream.