I LOVE Houston’s Restaurant (some locations have been converted to the Hillstone brand). The food is always consistent and I know I won’t be disappointed with the experience. Besides being reliable, there’s also another reason I keep going back. It’s called the Hawaiian Ribeye. I love a simple good steak that is seasoned with nothing more than garlic salt and pepper. But the pineapple and soy sauce marinated Hawaiian ribeye, seared perfectly on the outside and so tender when you cut into it, makes my mouth water even when I’m full. Not sure how many ounces it is but I can never finish the whole thing. It makes a fantastic breakfast the next day when sliced and heated up on the skillet. The aroma fills the entire kitchen. After discovering Costco’s fine selection of prime, choice, and select grade ribeyes, I did a search for the recipe and picked the apple cider vinegar version that had the most positive user reviews. The recipe is easy enough; I already had everything except the apple cider vinegar. After heating up the ingredients in a sauce pan and then marinating the piece for 2 full days in the fridge, it was grilled up last night when 12 people came over for burgers and brats. The steak was gone in seconds. It was sooooo yummy and tasted very close to the real thing. The only changes I will make next time is to use a little less vinegar and more pineapple juice. Houston’s also grills theirs over hardwood. Now that this recipe has been tried and deemed true, I am definitely making this again! By the way, if you aren’t a fan of ribeyes, the Prime Rib French Dip Sandwich served with au jus is also fantastic. I love you Houston’s.

*I’ve received quite a few comments from blog readers who said their marinade came out way too salty and ruined the steak. The kind of soy sauce I have at home is lighter in sodium so that may be the cause. To be on the safe side, I’d suggest using light or low sodium soy sauce. Some users also had success after reducing it to 2/3 cup of soy sauce. Salt can always be added later. Also, taste the marinade before adding it to the steak. It should taste slightly salty, slightly sweet.

Combine in a saucepan and heat up slightly to let the flavors come together. 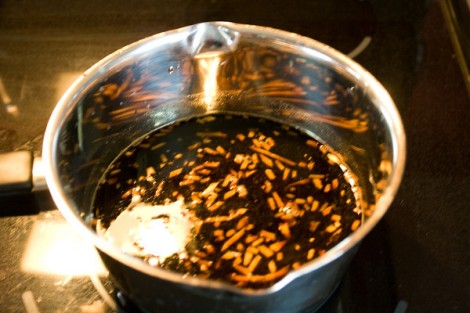 Let the marinade cool completely. Pour into a quart sized zip lock bag with the ribeye and place in a container in the fridge. Marinate the ribeye for a minimum of 2 days.

grill for 2 min each side for medium rare: 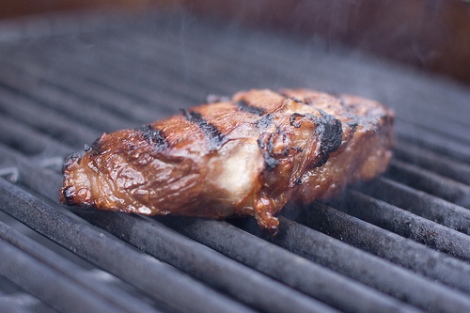